Well, if you’re into animal sacrifices it is, because that’s what constitutes this whole business of repetitive confession of sins. It’s that never ending cycle of sin, confession of same, request for forgiveness and then back to sinning again with the process then repeated over and over and over again. When does this accursed wretched condition ever end? Answer: would you be glad to know that it ended nearly two thousand years ago? The trouble is, even those who profess to be believers in The One, that is, Yashua Messiah, who ended this wretched condition and ritualistic state of affairs, are not even aware that He did so. Unbelievable? You would think so, but it’s absolutely true and, sadly, I jest not.

So how do we know all this? Quite simply, through the behaviour of those of the Cainite-Judeo-Christian Religion, who repetitively get down on their knees, most likely every day of their sad wretched lives, and confess their latest sins and then ask someone, whom they delusionally think is listening, for forgiveness of those sins. This, dear people, is unhinged thinking at its worst and almost comical if it were not so blasphemously serious.

Now don’t get me wrong, ‘cos I was as deluded and stupid as they are, in the past, being just as deceived, so I am not taking the smug ‘I told you so’ attitude with this issue, but I am giving you all a no-nonsense wake up call.

So, with the preamble over, let’s move on to the Holy Scriptural evidence and proof that what I am saying is TRUE!! Listed below are all the New Testament Scriptures, bar one (James 5:19) containing the word ‘confess’, and all from the King James Version of the Holy Scriptures:

1) Matt 10:32 (KJV) Whosoever therefore shall confess me before men, him will I confess also before my Father which is in heaven.

2) Luke 12:8 (KJV) Also I say unto you, Whosoever shall confess me before men, him shall The Son of Man also confess before the angels of God:

3) John 9:22 (KJV) These words spake his parents, because they feared the Jews: for the Jews had agreed already, that if any man did confess that He was Christ, he should be put out of the synagogue.

4) John 12:42 (KJV) Nevertheless among the chief rulers also many believed on Him; but because of the Pharisees they did not confess Him, lest they should be put out of the synagogue:

5) Acts 23:8 (KJV) For the Sadducees say that there is no resurrection, neither angel, nor spirit: but the Pharisees confess both.

6) Acts 24:14 (KJV) But this I confess unto thee, that after The Way which they call heresy, so worship I The God of my fathers, believing all things which are written in The Law and in The Prophets:

7) Romans 10:9 (KJV) That if thou shalt confess with thy mouth The Lord Jesus, and shalt believe in thine heart that God hath raised Him from the dead, thou shalt be saved.

8) Romans 14:11 (KJV) For it is written, As I live, saith The Lord, every knee shall bow to me, and every tongue shall confess to God.

9) Romans 15:9 (MCV) And that the Nations might glorify God for His mercy; as it is written, For this cause I will confess to thee among the Nations, and sing unto Thy Name.

10) Phil 2:11 (KJV) And that every tongue should confess that Jesus Christ is Lord, to The Glory of God The Father.

11) 1 John 1:9 (KJV) If we confess our sins, He is faithful and just to forgive us our sins, and to cleanse us from all unrighteousness.

13) 2 John 1:7 (KJV) For many deceivers are entered into the world, who confess not that Jesus Christ is come in the flesh. This is a deceiver and an anti-Christ.

14) Rev 3:5 (KJV) He that overcometh, the same shall be clothed in white raiment; and I will not blot out his name out of The Book of Life, but I will confess his name before my Father, and before His angels.

Notice that there is only ONE verse above i.e. 1 John 1:9 that refers to confession of sins and I will return to this verse later.

Next up, these are the only two verses in the KJV containing the word ‘confession’:

Romans 10:10 (KJV) For with the heart man believeth unto righteousness; and with the mouth confession is made unto salvation.

1 Tim 6:13 (KJV) I give thee charge in the sight of God, who quickeneth all things, and before Christ Jesus, who before Pontius Pilate witnessed a good confession.

Now note this carefully, because all the above passages of Holy Scripture, except for one verse, do not refer to the confessing of sins, nor do they refer to anyone repetitively confessing their sins but, rather, to confessing or openly admitting, that is, verbalising out loud that Yashua Messiah (Jesus Christ) is Lord and God and has come in the flesh – a confession of their Faith.

Next, these are the only two verses in the whole of the New Testament that refer to the confession of sins using the word ‘confessing’.

Matt 3:6 (KJV) And were Baptized of him in Jordan, confessing their sins.

Mar 1:5 (KJV) And there went out unto him all the land of Judaea, and they of Jerusalem, and were all Baptized of him in the river of Jordan, confessing their sins.

Now have you noticed anything specific about these two examples of people confessing their sins? If not, I will explain, these acts of confession are one offs. These were confessions of sins at the time and occasion of their Baptisms and no other confession thereafter was required of them, why? Easy, because ALL OUR SINS are forgiven at the time of our Baptism – every single one – past, present and future!!

The same applied to those mentioned in 1 John 1:9 above – NOTICE:

1 John 1:9 (MCV) If we confess our sins, He is faithful and just to forgive us our sins, and to cleanse us from ALL unrighteousness.

Right, having provided all the evidence that proves that repetitive confession of sins is not required of born of God (born again) sons and daughters of God, there is always that little passage of Scripture that the KJV is inclined to provide as an additional study (much sarcasm here). Unfortunately, the gnat strainers and ‘i’ dotters and ‘t’ crossers will always grab hold of these more ‘testing’ Scriptures to try and make a case for their fallacious philosophical reasoning. So let’s go there now and read it before they do:

James 5:16 (MCV) Confess your faults one to another, and pray one for another, that ye may be healed. The effectual fervent prayer of a righteous man availeth much.

Here we have the word ‘faults’ which is from the Greek word ‘paraptoma’ which means to fall aside, a false step, a blunder or slip. The Greek word for sin is ‘hamartia’ so ‘faults’ are not ‘sins’ in the same way or in the ordinary sense. So what’s going on here in this congregation that James is revealing to us through his letter? Well he reveals it further in verse 19:

James 5:19 (KJV) Brethren, if any of you do err from The Truth, and one convert him.

To ‘err’ as in this case means to stray away or back slide from The Truth or to stray away from Yashua Anointed (The Lord Jesus Christ) altogether – very serious stuff. This means, to a degree, that the sinner must start again all over, so confession of sins is necessary once more. This episode is not about everyday misdemeanours or ‘harmartia’ sins and the confession thereof, as they are not required.

So there you have it, folks, there is no Biblical instruction or command to repetitively confess our sins after our initial confession at Baptism – none.

To sum up, repetitive confession of sins is a man made enslaving religious, legalistic ritual and custom. It is just another lie made up by men of the Cainite-Judeo-Christian Religion to keep their followers in a state of bondage, slavery, subjection and subjugation – it’s DeMoniC = DMC or in the exploded view, Domination, Manipulation and Control. They accomplish this tyranny by teaching their followers that they are only forgiven until their next sin, thereby perpetuating their reproach and guilt cycle – fear based manipulation.

This modern Pharisaical system is just another form or type of animal sacrifices only without the animals. In ancient Israel, when animals were offered as a sacrifice they only covered the recent sins of the sinner, as soon as he or she sinned again, then more animals were required as a sacrifice to cover their new or latest sins. Under this system they were never truly forgiven as we are under the once for all time sacrifice of Yashua Messiah (Jesus Christ). So with repetitive confession of sins, all we are doing is trampling over that precious sacrifice of our Lord Jesus Christ every time we confess our latest sins. 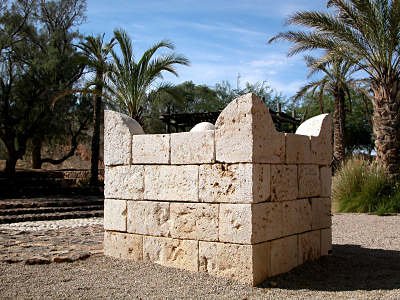 A reconstructed four horned altar of the type where repetitive animal sacrifices and confession of sins used to take place.

With that said, I now call upon all my brothers and sisters in Yashua Messiah (Jesus Christ), who are held captive to this satanic tyranny, to set themselves free and walk away from these people whilst you still can. Put your trust in The Father and His Son Yashua Messiah and Them alone, walk away, be free and live free under His awesome Glorious Grace where ALL your sins are forgiven.

John 8:32 (KJV) And ye shall know The Truth, and The Truth shall make you free.

John 8:36 (KJV) If The Son therefore shall make you free, ye shall be free indeed.

14 thoughts on “Is REPETITIVE CONFESSION of SINS Scriptural?”